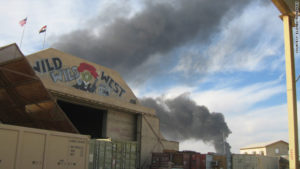 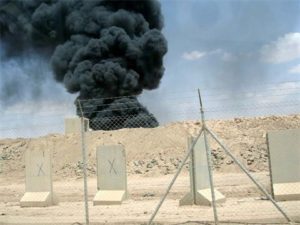 This past week, 700 veterans and family members wrote a letter asking letter asks for Obama to use his final months in office to “speak out and educate the American people” about the long-term health effects and deaths of burn pits in Iraq and Afghanistan. The letter also asks that more families are allowed to record veteran’s medical problems in the National Airborne Hazards Open Burn Pit Registry. Rosie Lopez-Torres, executive director of Burn Pits 360 told the Military Times: “We’re receiving death entries from these families on a weekly basis,” said Rosie Lopez-Torres, executive director of Burn Pits 360. “But the national registry now doesn’t allow you to input a death entry. So there is no record of (those veterans’) illnesses.”

More than 81,000 veterans and current service members are in the registry, reporting illnesses from respiratory fatigue to rare cancers and neurological disorders. Rosie Lopez-Torres told the Military Times that she has at least 5,000 more cases that aren’t included in that list, because of the reporting restrictions.

“The burn pits are this generation’s Agent Orange, but we are seeing deaths happen after three or five years, instead of decades later,” Torres said.

Veterans are frequently denied a service-connected disability claims for a burn-pit related illness. Veterans Affairs decisions have frequently cited the difficulty of linking troops’ illnesses to burn pits in Iraq and Afghanistan, given the undocumented nature of what was burned in each pit and just how much exposure individual veterans had.

However, the VA has a little understood presumption for those Veterans who served in Southwest Asia from August 2, 1990 to the present. These veterans may have been exposed to environmental hazards such as burn pits and oil well fires. These exposures may lead to an “undiagnosed illness” or certain “medically unexplained chronic multi-symptom illnesses.” Sometimes these illnesses are referred to as the Gulf War Syndrome.

The VA has acknowledged that from 2001, the United States military created large burn pits to dispose of waste in Iraq, Afghanistan, and Djibouti. The VA recognized that the burn pits such as the one at Joint Base Balad released toxic substances that could have been inhaled or ingested by troops.

For more information, contact the Law Office of Edward M. Farmer for a case evaluation.

Complete the form below to hear from an experienced veterans’ attorney.